Task set by my local writing group to base an item of creative writing on the poem by Walter de La Mare in 20 minutes flat. You probably need to read the poem first…

He wished he hadn’t brought the horse. It was a silly affectation that at the time had suited his mood. He hadn’t needed it, obviously. And now that he was here at the dark, dead house he felt almost embarrassed at his weakness for theatrical whimsy. He sighed and dismounted; then, not knowing what to do with the reins, let them drop and hang loose from the horse’s black head. The horse stared at him briefly then turned towards a more interesting tuffet of dew-dampened grass that glinted in the moonlight. 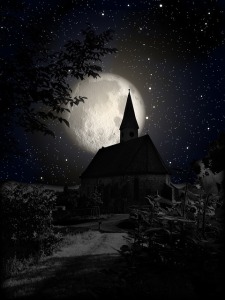 The house showed no more sign of life than he had expected. He knew it was almost certainly a pointless journey. But his life had been full of ‘almost certainties’ which had nonetheless proved the exact opposite, so he had had to come. He stepped forward and knocked.

“Is there anybody there?” he asked. Nothing answered, save a startled bird from high above. He repeated the knock and call.

He felt the merest suggestion of a presence, but not the one he had hoped for. He considered the options, the possibilities. His concentration was broken by his horse tearing noisily at a fresh clump of grass.

He banged on the door one more time and shouted, “Tell them I came, no-one answered, that I kept my word.”

He put his hand in his pocket, briefly considering using the item nestling there. He let it go and turned to the horse.

“Come on Dobbin, let’s get you back,” he murmured as he mounted the horse, gingerly turned about and headed back to the TARDIS.

3 thoughts on “After ‘The Listeners’”