I spent five minutes staring into my wardrobe this morning. No, nothing related to witches, lions or portals to another world; and I wasn’t trying to pick an item of clothing. No. I knew which shirt I wanted to wear but I was buggered if I could find it.

Orangey-red one, posh one, black one, office one, no, no, no.

Where the hell was my grey combat shirt?

I double-checked that it hadn’t been accidentally placed amongst my jackets and suits. Nope. Was it hiding with my trousers? Negative, captain.

I went through my shirts again.

Orangey-red one, posh one, black one, office one, purple, green, stripey…

I got down on the floor and rummaged through the bags and junk, making sure it hadn’t fallen off the hanger. It had not.

I very slowly went through the shirts once more.

Orangey-red one… posh one… black one… office one… all the way through until the slightly-too-tight wing collared tuxedo shirt.

I was perplexed. I hadn’t worn it that recently, it wasn’t in the washbasket and just the other week I’d cleared my entire ironing pile (it was immense, thank you for the applause) so it SHOULD BE IN MY BLOODY WARDROBE!!

Unless… unless I’d left it somewhere. A hotel when I was working away from home. Or when I was performing or rehearsing for the last play I had been in. Damn. That was probably it.

I realised the most likely place I’d left it was in the dramatic society’s costume room when I was getting changed into period clothing for a rehearsal. So “has anyone seen a shirt?” wasn’t going to be a terribly specific question.

I began to mentally list the shirt’s defining features in order to give people a better idea of what we would be looking for: mid-grey; press-studs instead of buttons; two breast pockets; epaulettes; and a slight mark on the collar where the colour had faded (I keep meaning to strip the grey out and then re-dye it another funky colour, probably orangey-red…) 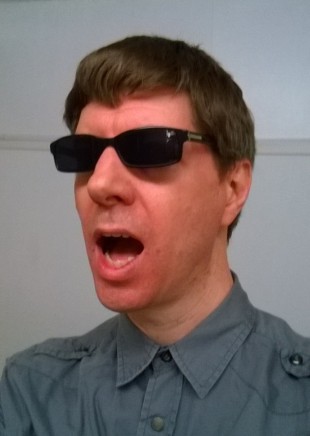